Two Giants Have Passed, Their Lessons Stay with Me

My father’s generation is exceptional in many ways. They just don’t make them like they used to. Since my Dad’s passing in 2003, I have grown closer to a couple of dozen people in my Dad’s age group whom I feel so blessed to count among my friends and mentors. They have all made an important impact on society while retaining their down-to-earth natures, kindness, and humility. I wish my Dad could be here to meet them. Our society would be so much better off were we to draw more from their wisdom and values.

Two giants cut from the same cloth were recently lost to our world in close succession. These men are Rabbi Lord Jonathan Sacks and Sir James Wolfensohn, whose impact on me I’d like to commemorate with these reflections. 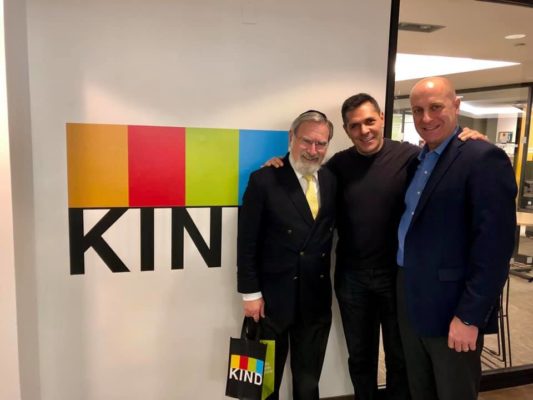 Rabbi Sacks, me, and Gidi Grinstein at the KIND offices pre-COVID

Jonathan Sacks was Chief Rabbi in the United Kingdom from 1991 to 2013. He wrote more than 20 books on ethics, religion, the relationship between science and religion, and issues of war and peace. Unlike Catholicism, Judaism does not have one centralized leader like the Pope, but were there a nomination for some of the most influential Jewish voices and spiritual leaders of our world, Rabbi Sacks would have made a very short list.

Rabbi Sacks was an intellectual giant and masterful thinker whose philosophy on human relationships struck me most. His stance was to build alliances with all of humanity to advance rights for ALL people – for Jewish people, but not only for Jewish people. Some debate whether the best way to prevent atrocities like what happened to my father is to fight anti-Semitism exclusively and many groups believe the best way we can defend our communities is to fight discrimination directed specifically at our own people. But Rabbi Sacks’ philosophy, as he often shared with me and others, was to build alliances and speak forcefully against ALL forms of discrimination. He made a point of vocally defending any group being treated unfairly. If a Muslim or Christian community came under attack, Rabbi Sacks aimed to be one of the first to condemn it. His approach was not only human and moral, but also strategic. When the Jewish community is threatened and another religious community speaks up in solidarity, ALL of society advances. Hate is hate no matter at whom we direct it – it can always find a new vector.

Rabbi Sacks’ work to advance all of society did not come at the cost of celebrating his Jewish heritage. I recently introduced his video ‘Why I am a Jew’ to my children, using it as a way to explain the importance of being proud of who we are while also recognizing the beauty of other religions and people. We can love our heritage without needing to feel that it’s better than others. All schools of thought and belief have important contributions to make – we stand to learn much from one another if we don’t discredit any one group or concept absolutely.

When Rabbi Sacks visited my office a couple of years ago, our conversation turned to Jewish ethics. I reflected that my business decisions were often informed by lessons I had drawn from Jewish studies and from values I had been taught as a kid in Mexico – from Sholem Aleichem’s and Isaac Bashevis Singer’s tales that brought to life a humanistic form of Judaism, to lessons our Bible teacher drew for us. I had been gathering quotes from Ethics of Our Fathers, the Midrash, and other Jewish sources. I proposed off the cuff that that we write a book about how Jewish ethics can inform business decisions – how they can serve as guideposts and sources of inspiration for business leaders navigating the critical issues posed by modern society. Rabbi Sacks was curious but guarded, asking if I had written anything before. I gave him a copy of my book, Do the KIND Thing, hesitantly, because, while I am proud of it, it is nothing like the literature he has produced. To my delight, Rabbi Sacks called a couple of weeks later to say he would enjoy writing this book together once his attention to his current commitments allowed for it. Sadly, we will no longer be able to carry out this vision together, but in Rabbi Sacks’ honor, I hope I can one day pick up the mantle of this project in partnership with other leaders of the Jewish faith.

Remembering and Honoring Sir James Wolfensohn and his wife, Elaine

After graduating from Law School in 1993, I gave up my law career to found PeaceWorks, my first company aimed at using business forces to resolve the Arab-Israeli conflict in the Middle East. In 1995, James Wolfensohn became the ninth president of the World Bank Group, where he served two terms on the nomination of President Clinton. During his tenure and beyond, he made a name for himself for his work to further poverty alleviation and rethink development financing.

Upon reading about Mr. Wolfensohn’s work, I wrote to let him know he had inspired me and requesting his advice. At the time, PeaceWorks was facing continuous setbacks and challenges that had shaken my faith in our model and mission. Mr. Wolfensohn took the time to write me back with a letter of encouragement, explaining that our work spoke to him, as he too sought to channel economic forces to overcome conflict. His letter became the motivation I needed to keep fighting. Since then, the power of a few encouraging words has never been lost on me. When pursuing a mission and trying to spur meaningful shifts in society, discouragement or naysaying can be highly demotivating and may even keep others from making positive change in the world. We should always bear in mind that our words hold weight – they may give others energy and commitment, or they may dampen their will.

Jim and I stayed in touch and, over the years, developed a light friendship. As his health began to deteriorate, I tried to honor the way he inspired me by visiting with him and playing chess with him.

Then there is Jim’s wife, Elaine. I visited with her shortly after he passed away. I told her how much I admired her for taking such loving care of Jim and for being such a kind leader on her own. She offered me something to eat. It was a pleasant meal – smoked salmon, fresh baguette, and cream cheese – accompanied by a rich conversation. She thanked me for visiting with Jim and playing chess with him…but then I woke up and realized I had been dreaming. It had been quite a lucid dream and I was shaken. I got up and began writing this note. I guess my subconscious regretted having never properly thanked Elaine for all that she did. She passed away 60 days before Jim, a painful shock to all. She had been tirelessly caring for her husband and all her family. I don’t think anyone imagined her death would precede his. All who knew them must have understood the tragic and romantic logic of Jim finally giving way after losing his life’s partner.

Imagine this: you step into the elevator and instinctively reach for your smart phone, only to discover that you’ve mistakenly left it at your desk. A sense of panic sets in as you wonder what to do. What will you think about when you can’t have your “thoughts” fed to you?

END_OF_DOCUMENT_TOKEN_TO_BE_REPLACED

Throughout my life, I have sought to build bridges between people, seeking to help both sides...

END_OF_DOCUMENT_TOKEN_TO_BE_REPLACED

Today, I want to talk about a light and fluffy subject: your generation’s role in steering humanity in the right direction. No pressure, Dalton.

But in all seriousness, Dalton, I love what you shared about “leaving everywhere you go better than you found it…and finding ways to give grace and inspiration to the people around you.”

I want to talk today about HOW to do that as you are all simultaneously challenged and blessed with graduating as our world is re-entering a stage of dramatic consequence.

The ship of humanity is moving in the wrong direction, and it will be upon all of you to steer it back on track.

To illustrate this point, I want to compare the circumstances when my father’s generation came of age, to those when my generation and your generation graduated from college.

My father was fifteen-and-a-half when he was liberated from the Dachau concentration camp by American soldiers. He was barely alive.  He never got to go to school past third grade, let alone college. Several of your grandparents were around your age when they were sent to free Europe from tyranny and darkness.

By contrast, when I was fifteen years-old, my family immigrated to America from Mexico. I was able to attend college during a period when passionate but cordial debate was the norm. I remember observing political leaders vehemently disagree on a particular topic, while maintaining a friendship rooted in respect. Our world was far from perfect – but the arc of human progress trended in an upward direction. Freedom, open markets, human rights, civility, and the quest for knowledge were all advancing.

It seemed almost too good to be true.  In fact, it was so good that we began to lose sight that Our Great American Experiment isn’t so much a fixed state of affairs as it is a purposeful daily affirmation – something that we opt into, live out, and vote for not once every four years, but every single day – through how we engage with one another.